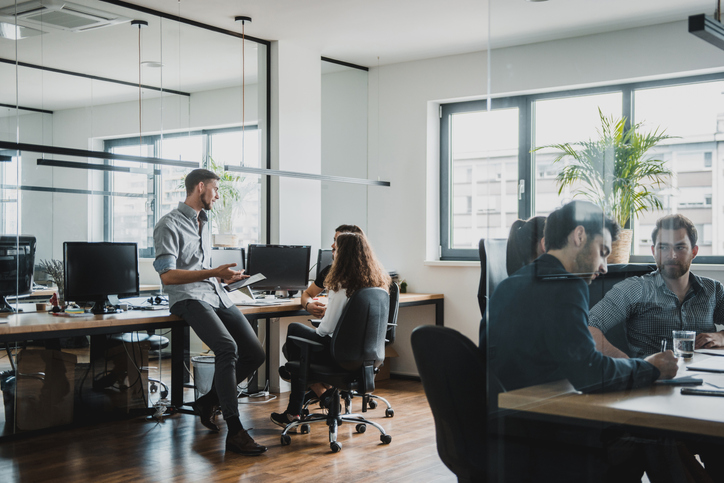 The Kauffman Foundation is a non-profit institution devoted to education in entrepreneurship. In 2012, the foundation published a white paper “We Have Met the Enemy…and He is Us”. Upon analyzing two decades of investment performance across 96 VC funds, the study exposed fractures within the LP investment model and posits the underperformance of venture capital financing as a whole. The paper has since become the source of much debate. 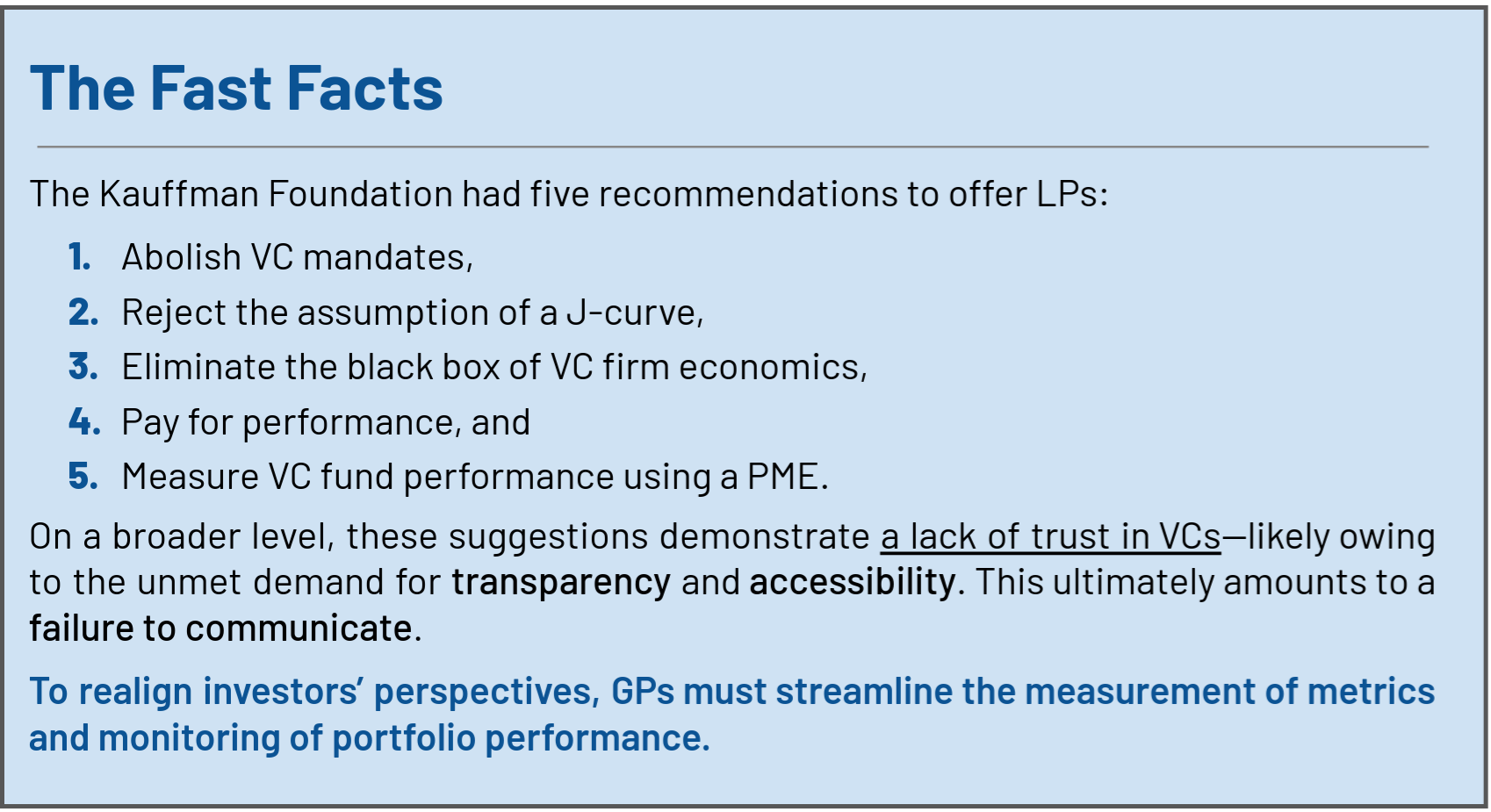 In today’s installment of Research Recap—our series summarizing industry studies and academic research (sparing you the “light reading”)—we’re focusing on the findings, not the conclusions. If you’re reading this, it’s too late to speculate on whether venture capital is “broken”.

We can’t reinvent the wheel. But we can pump some air in the tires. Let’s break down a few key findings from the Kauffman study to see how LP-GP relationships can improve.

“We Have Met the Enemy…” has been a popular topic of conversation in certain circles of academia and venture capital. Much of the debate stems from perceptions that the Kauffman Foundation doles out an undue tongue-lashing to industry GPs.

It’s interesting that VCs have positioned themselves as supporters… of innovation, yet there has been so little innovation within the VC industry itself.

Before we light the torches and sharpen the pitchforks, let’s take a look at the five recommendations the study imparts on institutional investors.

The study posits that the willingness to accept VC underperformance is owed largely to an LP feeling their hands are tied by the allocation policies of their investment committees. The authors infer that investing in anything other than the top 10-20 most successful VC funds poses more risk than it’s worth. They go on to suggest that institutional investors should instead consider shifting their gaze to small cap public equities. Whelp! Looks like we can wrap this up here. No?

2. Reject the Assumption of a J-Curve

The study finds evidence to suggest the existence of a “J-curve” is less common than is to be expected given it’s acceptance across the industry. GPs are accused of making irresponsible investments ahead of a fundraise which, while producing positive returns in the immediate sense, serve as a detriment to success in the long run. VCs are, by extension, accused of acting against the interests of LPs.

The authors point to the pivotal role of the J-curve in enabling GPs’ to argue against publishing a fund’s early returns, citing the excuse that sharing negative results pressures institutional LPs to reduce their investment in venture capital. The paper recommends adopting an evergreen structure to reduce the emphasis on timely returns and instead encourage long-term view on exits throughout the fund.

Investment committees are advised to graph a VCs returns over time, analyzing valuation and fundraising metrics to more accurately predict the influence of J-curve returns.

The authors use the term “black box” economics to imply that obfuscating details on compensation, carry structure, and GP commitment allows VCs to act on revenue opportunities which subject LPs to unnecessary risk (as demonstrated by using irresponsible investments to manipulate performance metrics ahead of a fundraise). Investment committees are encouraged to make their approval contingent on a VC offering full transparency on terms which can be manipulated to their advantage

The foundation suggests the “2 and 20” fee structure rewards raising bigger funds over funds that perform well. The study outlines an alternative profit-sharing structure in which VCs are only compensated after breaking even on an LP’s investment and providing a preferred return.

The study suggests LPs adopt PME, or “public market equivalents”, comparing cash flows across a fund to indexes of common stock.  The authors emphasize the importance of making PMEs part of every investment decision. They also advise against using metrics such as IRR, gross returns, and top quartile which they view as being vulnerable to “performance marketing narratives”.

The study clearly makes a case for why an LP would be wise to introduce a healthy skepticism into their relationship with VCs. While it’s fair to say the Kauffman Foundation wasted no time in painting venture capital firms with a broad brush, there’s a kernel of truth behind the reasoning for each of these recommendations.

It’s clear to see why the Kauffman study has created a bone of contention between VCs and their investors. The paper doesn’t hesitate to speak on your behalf. Still, the basis of each passive-aggressive perspective presented within these recommendations is no mystery either. Each points to a problem plaguing the venture capital industry; just not the right ones.

Sprinkled throughout the five recommendations is an overarching demand for transparency and accessibility. Having gone unmet by so many for so long, this demand has mutated into a collective lack of trust in the LP-GP relationship. The suggestion that LPs should have to force your firm to focus on long-term view on exits and (when you don’t) that they should model things themselves? That should raise a red flag for any self-respecting venture capital firm.

While it’s possible some VCs have ulterior motives for refusing to publish early-stage returns, the study fails to account for the difficulties GPs face in measuring metrics for a young fund. Extracting a full set of accurate metrics can be like squeezing water from a stone (if each stone used a different cap table tool). Depending on the makeup of your portfolio, companies’ metrics may not follow a traditional organizational structure. Some may have a scant few data points on which to report. Meanwhile, you can count on fund admins taking their sweet time getting back to you on multiples and IRR.

Overcoming the challenges of supplying your investors with accurate, up-to-date metrics can be difficult, however the practice plays an instrumental role in cementing your commitment to transparency. While it’s not always possible to produce the analytical depth of an annual report at the drop of a hat, the data you do have on hand should be accessible to LPs. Streamlining the processes involved in managing equity and monitoring performance frees up the time to construct valuable insights, forecast exit scenarios, and ultimately make smarter investment decisions. Better yet, it gives GPs the power to share their side of the story and realign investor perspectives.

Mulcahy, Diane & Weeks, Bill & Bradley, Harold. (2012). We Have Met the Enemy…and He is Us: Lessons from Twenty Years of the Kauffman Foundation’s Investments in Venture Capital Funds and the Triumph of Hope Over Experience. SSRN Electronic Journal. 10.2139/ssrn.2053258.

In our new series, Research Recap, we’re giving you the need-to-knows from the mountain of…